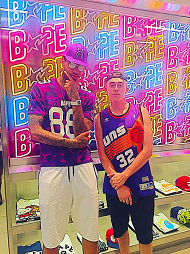 While shopping at the BAPE store in Hong Kong and copping some new jewelry from Rafaello and Co in Manhattan, the 22-year-old NBA player was spotted wearing a purple camo 88 BAPE tee-shirt and a red camo hoodie.

He played college basketball with the Kentucky Wildcats. On June 25, 2015, Cauley-Stein was selected with the sixth overall pick in the 2015 NBA draft by the Sacramento Kings.

He is repped by Jay Z‘s Roc Nation Sports.