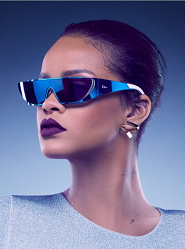 In her latest fashion moves, Rihanna has partnered with Dior on a line of futuristic, reflective sunglasses. The name of the collection is simply “Rihanna“.

This all makes sense because last year, we reported that Rihanna was the first Black girl to front a Dior campaign. So it’s all part of her brand ambassadorship.

The sunglasses was inspired by Geordi La Forge from “Star Trek.” “I’ve always been obsessed with his eyewear, and when I got to Dior and saw all the materials I could play with, it all just came together,” Riri said.

There is one frame available in six variations; — the silver, pink, blue, green and red styles will cost $840, while a “deluxe” 24-karat gold-plated one will cost $1,950. The sunglasses will be available in June, only at Dior stores.

“We are very pleased to partner for the second time with Rihanna,” said Dior chief executive officer Sidney Toledano. “She is an artist, an entertainer, an entrepreneur, a philanthropist, and a style icon for today’s generation.”

According to WWD, “The sunglasses are her first design project with Dior, a privilege never before granted to one of its house ambassadors. In October, Rihanna visited Dior’s headquarters on Avenue Montaigne to meet with the eyewear design team going over vintage frames, ultimately picking a style from 2000 as the key reference.”

In terms of the design process, she said, “The process was pretty seamless. I spent a day at Dior with their eyewear design team. I started by looking through all the archives to see what they’ve done in the past, then got acquainted with all the new materials. I literally sat there and drew and drew until I was happy with the design, and the team illustrated it for me right then and there. We picked materials and colors that same day, and after that it was a matter of weeks before I saw the first prototype.”

There is no official campaign to accompany the launch, although Jean-Baptiste Mondino shot Rihanna modeling the frames for a series of in-house editorial images.