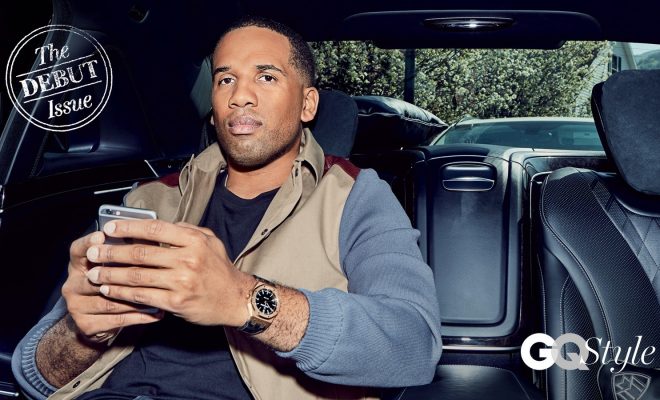 Carter grew up with the Cleveland Cavs player in Akron, Ohio. He was a senior at St. Vincent-St. Mary High when ‘Bron was a freshman.

Anybody could give you an opportunity, but it means so much more when that opportunity comes from one of your friends. One of the things that I respect and like about ‘Bron is that when he came into the league, he didn’t forget about his homies (an urban word for friends). In fact, he hired them to work for him.

As ‘Bron‘s business manager, Carter is the creative director of all things King James. What does that entail? Well, NBA basketball and an apparel empire. A Hollywood production company. (The Starz show Survivor’s Remorse is Mav‘s.) A scholarship program. And a media platform called Uninterrupted, where players tell their own stories.

He played a central role in securing James a billion deal with Nike.

Carter talks to GQ Style about James‘ Nike deal, breaks down his negotiating strategies, his regrets—and how he turned a ballplayer from Akron into a billion-dollar global brand.

Below and on the next pages are from excerpts:

You’re really making a go of this Hollywood thing. Was this always the goal? Was 8-year-old Maverick Carter dreaming about Hollywood?

Maverick Carter: No. It was never my dream.

When did it become your dream?
When people ask what college I graduated from, I say: I didn’t graduate from college. I graduated from Nike. I started my career as an intern getting coffee. I was working in sports marketing, which means building the brands of Nike and the athletes. What I realized after I left Nike is that they tell stories. These shoes I have on are just shoes. Obviously, they put some technology in it. This is knit. This is lunar. Blah blah blah. But they tell you the best story ever about this sneaker. They tell better stories than anyone in Hollywood. So it was just a natural evolution: marketing, storytelling, building your brand, producing content. I’d been doing it my whole life already.

What do you think is the biggest mistake you’ve made so far?
[takes a moment to think] When I first left Nike to go work with LeBron and manage him, I was really bullish about managing other athletes. I really wanted to get more athletes besides LeBron and build this big management practice. And in hindsight that was a mistake.

Why was it a mistake?
A couple of reasons. One is that there’s only one LeBron. Another reason is that other athletes always viewed me as LeBron’s guy. They thought: He can’t be my guy, too. It was a mistake because I lost time on it. And managing LeBron was enough. It was plenty to do.