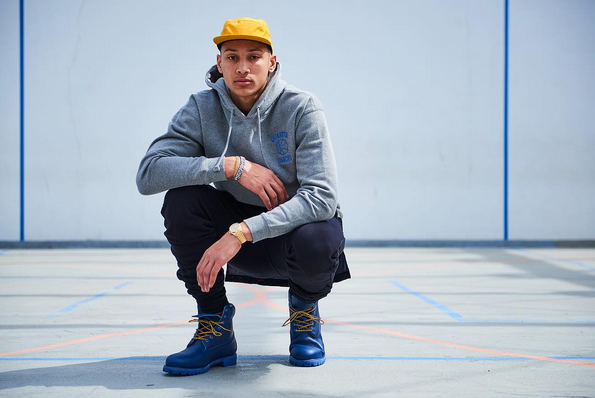 Earlier in the week, we reported that Australian basketball player Ben Simmons who most recently played with the LSU Tigers was covering the latest issue of Slam magazine (see it here). Today, we received more images and excerpts from Simmons‘ shoot and interview.

The 6-10 and 250 pounds basketball player been touted as a possible first overall pick in the 2016 NBA Draft.

James is Simmons‘ favorite player and they also share the same agent: James‘ longtime friend and business partner, Rich Paul. So the comparisons are obvious!

Simmons dressed in a NBA All-Star jersey, $410 Thom Browne Cotton-Jersey Jogging Bottoms, with a denim shirt tied around his waist and $190 Timberland Classic 6″ Premium Boots in black suede, an olive jacket which was layered over a white tee-shirt styled with $1,325 Balmain Men’s Classic Straight Leg Biker Jeans and $190 Timberland Classic 6″ Premium Boots in nubuck, and his final outfit was a grey hoodie paired with navy jogger and royal Timberland boots.

The Thom Browne joggers are available at Selfridge.

The black suede Timberland boots are available at Zappos and Nordstrom.

The Balmain jeans are available at Barneys and Far Fetch.

The Timberland boots in nubuck are available at Zappos and Nordstrom.

Inside, he talks about visiting the Bronx, New York, which is his father’s old stomping grounds (His father David hooped at South Bronx High before playing ball at Oklahoma City University and then enjoying a pro career in Australia, where Ben was born).

The trip to dad’s old stomping grounds offered the opportunity to reflect on his journey before beginning to prepare for its next chapter:

“Real struggles out here,” says Simmons of being in the BX. “It’s my second time. I came here a while ago. Visited with dad. Came down and saw my grandparents. It’s cool to just get back here and see where my dad is from—and the culture and how different it is.”

“This is the real first time I’ve been able to just experience it. Other times I’ve come here, I’ve been busy with basketball commitments or whatever it is, so for me it’s just [about] walking around and taking it all in. It’s amazing.”

Read more excerpts on the next page: