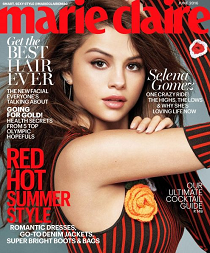 Selena Gomez covers the June 2016 issue of Marie Claire magazine. She fronts the cover in a Christopher Kane ensemble.

This issue hits newsstands May 17. Below are some excerpts:

On dating: “I’ve been dating. I’ve been having the best time. But I don’t trust anybody, so dating can only be fun if I know I’m going to have fun.”

On how she deals with agents and managers: “Authenticity is my life. They make great choices, but I make the decisions.”

On being known for who she dates with not who she is: “I would try to promote something that I loved, and the entire interview would be about my personal life. I would leave a room feeling defeated, feeling embarrassed, but I would always make sure to put that smile on my face because I wasn’t going to let them get to me.”

On taking control of her career: “I had to not be afraid to ask dumb questions, which means I asked a million things about ever single step that I was making.”

On her upcoming tour and film: “I finally just wanted to go for it. I wanted to do things that I knew were going to be me. I don’t want people to look at me as someone who is just this celebrity person.”