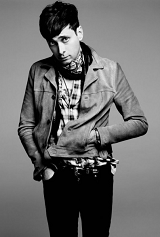 Hedi Slimane Denied Plans To Launch Eponymous Label; Is He Headed To Chanel? Last month, donbleek.com reported that we heard that “Hedi Slimane may be looking for an investor to back his namesake fashion house.” He “was recently spotted at the Mayhoola for Investments offices in Doha,” according to WWD. It was reported that the Qatari-based fund was eyeing a further growth of its luxury and fashion portfolio.

Apparently those reports weren’t true. Yesterday, Wednesday (May 4), Slimane tweeted a press release (see below) issued by his lawyer Hervé Temime that denied he is looking for an investor.

There is still not much info on why Slimane left Yves Saint Laurent (YSL), but the release reveals that he has retained Temime’s services “to preserve and defend his rights under his agreements with the Kering Group, a mission which is actively being pursued.” He expressed his gratitude to “his beloved studio and couture ateliers, the Angers historical factory and talented seamstresses, and also the Fondation Pierre Bergé-Yves Saint Laurent,” and dedicated his four years at the helm of the brand to Bergé.

Our previous post mentioned that “the designer may have discussed funding for his own line with Mayhoola.” The press release denied that. In fact, it says the complete opposite: Slimane “has never had in the past, let alone now, the intention or desire to launch a brand under his name.” Moreover, the statement asserts that Slimane has never even been to Doha.

Now this brings back another rumor: that Slimane is headed to Chanel.

According to The Fashion Law, “Chances are, legal counsel will help Slimane to navigate his ability to work for a rival design house (read: Chanel), assuming an ironclad non-compete agreement exists between himself and YSL. As for the seeming urgency, it makes sense considering that Chanel creative director Karl Lagerfeld, 82, is, according to our sources, obsessed with finding his replacement and bringing him into the picture as soon as possible in order to be groomed to replace him come his decision to retire or otherwise within the next two years.”

Do you think Slimane would make a good fit at Chanel?