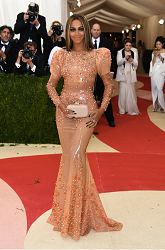 Fashionistas, fashionistos, and fashionable people in entertainment, music and sports attended this year’s event and the women stepped out in style, while the fellas dressed to kill.

Check out the celebs ensembles below and on the next few pages. Nas looks dapper in a black and white suit.