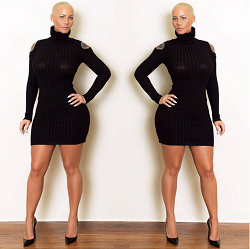 When the world was first introduced to Amber Rose over a half of a decade ago, I just instantly fell in love with her, (without even hearing her voice) because of her image and great sense of fashion. All I knew was that Rose was this blonde cute bald head chick that was dominating fashion back then. I loved her style and how she always kept a low profile.

Rose has since then risen to superstar status and became an entrepreneur. She created a powerhouse empire which consist of eye-wears, apparel, emoji app called MUVAmoji and a book.

The South Philly-native is now adding talk show host to her forever growing résumé. The former model, who was once signed to Ford Models has landed her own weekly talk show on VH1, according to The Hollywood Reporter.

“Produced by Dr. Phil’s and his son Jay McGraw’s Stage 29 Productions, the untitled weekly series will be hosted by Rose and premiere in the summer. (A specific premiere date has not yet been determined.)”

“The weekly series will feature Rose conducting candid interviews with celebrity friends and leading what is billed as provocative, entertaining and humorous conversations with guests on topics including pop culture, motherhood, relationships, friendships, race and entrepreneurship.”

“Amber has inspired millions of young women by overcoming homelessness to become a wildly successful entrepreneur,” VH1 GM Chris McCarthy said. “A true multihyphenate, she is a devoted mother, a strong advocate for women’s rights and a celebrated author all of which make her an ideal host. Amber is a perfect addition to the VH1 family because our audience is interested in hearing unique perspectives from those who are unapologetically themselves and not afraid to take a stand on issues they are passionate about.”

Added Rose: “I am very excited to be joining forces with such an amazing network to deliver a fresh perspective on the primetime talk show. Join us as we break all the rules and redefine late-night. Watch out Fallon, here comes Muva!”

She have come a long way from the rough streets of Philly.

Rose is repped by UTA, manager Nick Cannon and his Ncredible Entertainment and attorney Mosley.