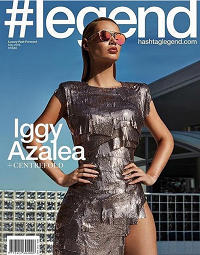 Iggy Azalea is making it known that she is here to stay. The Hip-Hop artist recently released her new single, “Team” (see it here) and covered the March 2016 issue of Schön! magazine (see it here).

Now the Aussie-beauty covers the May 2016 issue of Legend magazine. This issue was lensed by photographer Dennis Leupold, with creative direction and styling courtesy of Paris Libby.

Inside, the fashionista styles in a dress by Céline, bikini by Beach Bunny Swimwear, shoes by Grey Mer, top by DSquared2, bikini bottom by Moeva, shoes by Manolo Blahnik, top by Liana Chaplain, dress by Lever Couture, shoes by Giuseppe Zanotti, eyewear by Tyche & Iset, shoes by Versace, and more.

Head over to Legend magazine to read the full cover story.

The Def Jam recording artist is getting ready to release her Digital Distortion sophomore LP later this year. Serving as a follow-up to her 2014 debut album The New Classic, the new album is already getting high praise from industry insiders. Power 105.1‘s Charlamagne Tha God said he heard the project and it’s a “good album“.