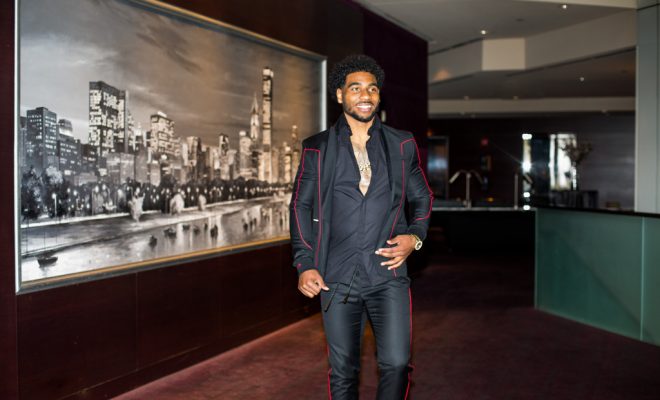 Braxton Miller In Philipp Plein For The 2016 NFL Draft; Talks Fashion & His Motivation Former Ohio State star quarterback-turned 2016 NFL Draft prospect Braxton Miller is the newest ambassador of the luxury fashion house Philipp Plein. He is also about to ink a deal with adidas for sports apparel.

The 6’2″ athlete wasn’t picked in the first round, but he has until tomorrow Saturday (April 30) to get drafted by a team.

On the morning of the 2016 NFL Draft kickoff day, Miller was preparing for a photoshoot at the Chicago Sofitel Hotel. For the shoot and draft day one, he styled in a fitted black European-cut Plein suit with red piping, from the brand’s fall collection with tags still dangling, and red embellished high-top sneakers. He also wore a tee-shirt and sweatpants from Plein. Everything was sent to Miller from the Swiss brand.

He did an interview with WWD, where he chatted about his love for fashion, being a brand ambassador for Philipp Plein, the slim-cut suit he wore for the draft, his relationship with Plein, potential modeling career, wanting to help Plein gain more brand recognition on this side of the Atlantic, saying motivated and much more. Below are some excerpts:

On his love for fashion and being a brand ambassador for Philipp Plein:

“I’ve always loved fashion. We don’t have much fashion in Ohio,” said the Springfield, Ohio native. “It’s a big accomplishment. I’m the first athlete in America to sign with Philipp Plein as a brand ambassador.”

On the slim-cut suit he wore the first day of the draft:

“I like Philipp,” he said. “Hopefully, we can have a relationship forever. He’s the best of the best right now. Best quality and workmanship. The shoes are amazing. And the suit, it’s a suit but it’s more like a comfort suit. But I’m not sure this is my size.”

On his potential modeling career:

“I’m doing photo shoots, fashion shows, appearances. In the fall, I’m going out to Milan for his fashion show. It’s going to be nice going overseas. I have to get my passport. I’m kind of nervous though,” said Miller, 23, who traveled to Chicago with his marketing agent Keith Harris as well as his father and brother for the draft.

Miller, who aspires to own his own fashion label one day, wants to help Plein gain more brand recognition on this side of the Atlantic:

“I want to rock the clothes so we can grow together as a team,” said Miller, who has already starting branding himself with two T-shirt designs: “Charging One-Way” and his signature spin move.

On what keeps him motivated: