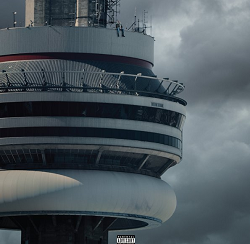 Drake Unveiled ‘Views From The 6′ Cover Art, Expected To Sell 1 Million In 1st Week; Plus He Announced Tour With Future Rapper Drake just unveiled the cover art for his forthcoming LP, Views From The 6. The project will drop exclusively on Apple Music and iTunes this Friday (April 29).

The Canadian rapper’s forth solo LP, which serves as the follow-up to 2013’s Nothing Was The Same is expected to sell one-million copies in the first week.

On the album cover’s, Drizzy sits on the edge of Toronto‘s CN Tower. The art work was shot by Caitlin Cronenberg (art directed by Nicky Orensetien).

“To the city I love and the people in it…Thank you for everything #VIEWS,” says Drake in a message tweeted.

Details surrounding Drake’s long-awaited Views From the 6 are scarce. To this point, the 29-year-old has released the songs “Summer Sixteen,” “One Dance” featuring Kyla and WizKid, and “Pop Style” with The Throne aka Kanye West and Jay Z.

Finally, Drake also announced a tour with rapper Future. The Summer Sixteen tour kicks off July 20 at Frank Erwin Center in Austin, Texas and will make stops in major cities including Chicago, Toronto, New York, Washington D.C., Philadelphia, Atlanta, Miami, New Orleans, Los Angeles, and Las Vegas before wrapping up at on September 17 at Pepsi Live at Rogers Arena in Vancouver, BC.

Related Items'Views from the 6'don bleekDrakeDrake Unveiled ‘Views From The 6′ Cover Art Expected To Sell 1 Million In 1st Week; Plus He Announced Tour With FutureFuture