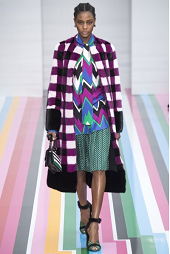 After a decade at the helm of Salvatore Ferragamo, chief executive Michele Norsa will exit his post by the end of the year. The news comes just one month after Ferragamo announced that its creative director Massimiliano Giornetti had stepped down from the Italian house.

“Norsa has expressed the wish to prioritise family and to focus on new professional interests after a long period of intense efforts and rewarding results,” the company said in a statement.

According to Reuters, “A source at the company confirmed that the decision had been taken in agreement with the Ferragamo family and was not due to any differences between the chief executive officer and the group. The source said there was no candidate lined up to replace him.”

The company said Norsa will continue to work with the brand in a non-executive role until the shareholders’ meeting to approve its 2017 results, expected in the first few months of 2018.

“It’s a surprise. I don’t know why he left so suddenly but I don’t think it’s going to help the stock,” a Milan-based luxury goods analyst told Reuters.

The announcement came after the stock market close.

“Norsa’s departure comes at a time when the luxury sector is grappling with weakening consumer spending in China, once a catalyst, falling oil prices and global security threats affecting tourist spending.”

“Since the company listed on the Milan bourse in June 2011, the value of Ferragamo shares have more than doubled.”

Ferragamo‘s performance in 2016 is expected to be in line with last year’s and the company is focusing on raising profitability, Norsa said earlier on Thursday, speaking on the sidelines of the annual shareholders’ meeting.

He said online sales continued to grow, particularly in the United Kingdom and the United States, and that the group would push for e-commerce in Asia “where expansion however requires more time because of bureaucracy.” ← Previous Story Is Hedi Slimane Looking For An Investor For His Namesake Fashion House?
Next Story → Tyga Spotted In A 424 On Fairfax Refinded Denim Trucker Jacket Layered Over A Carhartt ‘College Lt’ T-shirt