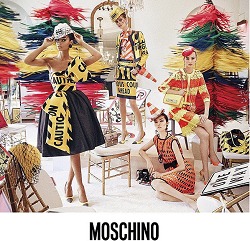 Moschino Will Show Men’s, Women’s Resort Together At Made Los Angeles Moschino is following the wave (an urban word for something that is trendy, cool or popular at the moment). The Italian luxury fashion house is showing its men’s spring/summer 2017 collection, along with its women’s resort 2017 collection together in Los Angeles on June 10.

The house which is designed by Jeremy Scott will animate the calendar of initiatives of Made LA, which includes a range of runways shows, parties and events to be held at Downtown Los Angeles’ L.A. Live event space.

“As I’ve been a Los Angeleno now for over a decade, the thought to transplant my Moschino show to the West Coast for a special showing has been on my mind since I took the role as creative director,” said Scott. “So when WME | IMG and MADE let me know they were brewing up an idea to do something in L.A., it took me no time at all to say ‘yes!’”