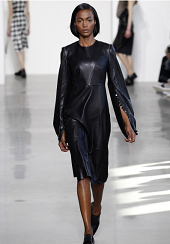 Another week, and these fashion houses and creative directors are still playing musical chairs.

“This creative strategy marks the beginning of another significant chapter in Calvin Klein’s brand legacy since Mr. Klein’s retirement,” chief executive Steve Shiffman said in a statement. “I would like to thank Francisco and Italo for their unwavering commitment to the Calvin Klein brand and their accomplishments over the past decade. They have both contributed immensely to making Calvin Klein a global leader in the fashion industry, and they have done so with dedication, focus and creativity.”

According to a statement via Calvin Klein Inc., “A new brand direction will ultimately follow one creative vision across all categories of the business. An announcement will be made in due course.” Until then, the company’s in-house design teams will conceptualise, produce and present each line. There will be no runway show for Calvin Klein Collection in June (for men’s) or September (for women’s), although presentations will be held for press and sales. Until a new creative director is announced, the men’s and women’s design teams will will report to Michelle Kessler-Sanders, president of Calvin Klein Collection.

For months, it has been rumored that Raf Simons will take rein at the American house. Last January, donbleek.com reported that “Raf Simons has a tentative appointment at Calvin Klein,” (see it here). Simons has a non-compete with LVMH Moët Hennessy Louis Vuitton (owner of Dior) until the summer. ← Previous Story Moschino Will Show Men’s, Women’s Resort Together At Made Los Angeles
Next Story → Is Karl Lagerfeld Ready To Give His Farewell To The House Of Chanel?