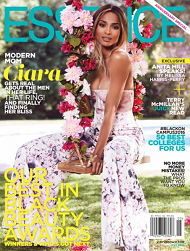 On the double cover, Cici styles in a stylish floral ensemble. Dennis Leupold lensed the shoot.

Inside, she talks about how in high school, she used to tell her friends about her goals, her planned pregnancy, unplanned break-up with rapper Future, and marrying her fiancé, NFL player Russell Westbrook. Below are some excerpts:

On telling her friends at Clayton High School in College Park, Georgia how she would grow up to become a world-famous singer:

“I made a goal sheet,” Ciara tells writer Jeannine Amber. On that list was also the dream of selling “3 to 4 million” records and “have longevity.” Those dreams came true by the time she was 21.

“I’d always wanted to have my own family,” she said. “And my pregnancy was planned when I was at a point in my life when I was finally ready to take on the responsibility.”

On her unplanned break-up with rapper Future:

“That wasn’t necessarily part of my vision,” she recalls. “But the moment I realized I was going to be a single mother, I had to reflect and reorganize my thoughts. I decided to trust that God had a plan for me, and move forward one day at a time.”

“I remember telling my friend the kind of guy I wanted: a God-fearing man with a very fun spirit who loves kids and would really, truly care for me. I was very specific because I do believe you can have it all.”