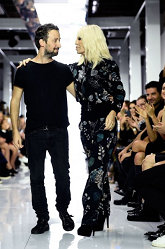 While at Versus Versace for a short amount of time, retailer has grown impressively, and the brand recently entered the U.S. market with its first brick-and-mortar flagship store in NYC.

The brand confirmed Vaccarello exited the house: “While I’m sad to see him leave the Versace family, I wish Anthony Vaccarello tremendous success with his next chapter,” Donatella Versace said in a statement.

“It has been signed. It should be announced on Monday,” the source told Reuters, on condition of anonymity.

The source added that “before Vaccarello accepted the job he agreed to stop developing his own brand and to focus solely on Yves Saint Laurent (YSL).”