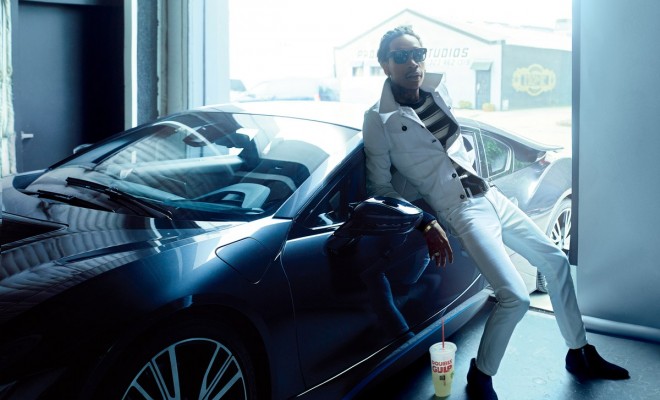 Wiz Khalifa Talks Feud With Kanye West, His DJing Residency In Vegas, And More With ‘GQ’ To coincide with his new DJ residency at Las Vegas‘ Tao nightclub, rapper Wiz Khalifa talked to writer Zach Baron over at GQ about DJing at Tao, his alias DJ Daddy Kat, feud with Kanye West and much more.

While DJing at Tao, Wiz is using the alias, DJ Daddy Kat:

“The alias is just so I could excel at something different the same way I did at rap,” he explains. Also, he says, “the money’s good.”

Where’d the name come from?

And who is DJ Daddy Kat?

“He’s just smooth. He’s just cool. He gets all the bitches. He makes sure all of his homies is taken care of. And he brings the waves.”

“I was listening to this song when I saw Kanye fire off that tweet”.

Last month, Wiz spent days engaging in an online public feud with rapper Kanye West, which has now been resolved. The feud started when West announced via Twitter that he had changed the title of his album to, Waves (the name was changed again to The Life Of Pablo). Wiz announced he had a problem with that. He tweeted, “Please don’t take the wave.” Max B—the incarcerated artist who’d used and popularized the term to refer to a certain kind of cool, relaxed way of being in the world—“is the wavy one. He created the wave. There is no wave without him.” And then Kanye, who’d also thought (wrongly, as it turned out) that Wiz had taken a shot at his wife (“Hit this kk and become yourself ”— Khalifa Kush, not Kim Kardashian, Kanye!), let out all the feelings, specifically the ones relating to Kanye’s ex and the mother of Wiz’s son, Amber Rose: “You own waves???? I own your child!!!!”

Kanye called him after the extent of the misunderstanding became clear.

Was that a long conversation?

“Nah. I keep shit brief. But for him, it’s no animosity, so it ain’t even no thing.”

“I have nothing to apologize for.”