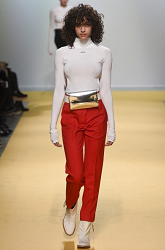 Virgil Abloh’s Off White Fall 2016 Show At Paris Fashion Week Lacked Black Models; I Will No Longer Cover His Brand

The show lacked nice looking, high quality, stand out pieces (some of the clothes were tacky, cheap looking and looked like you could pick them up at your nearest salvation army or neighborhood’s trash dumpster). The show also lack Black models. Abloh‘s Off White Fall 2016 show in Paris only featured two Black models out of a total of 31 looks.

Thanks to Kanye West, Virgil Abloh has a major platform (he is best known as Kanye West‘s creative director) and has been called the “Maestro of Elevated Streetwear” by Vogue. However, Abloh doesn’t use his platform to promote diversity in the fashion industry. It not by mistake that he keep lacking diversity at his runway shows.

Abloh is one of the most innovative people in streetwear that Black youth could relate to and connect with, but is he ignoring those same people for a more non-Black audience? Does he not care about Black models?

Season-after-season designers get called out for their lack of diversity, one would think that a Black designer from the rough streets of Chicago would go over and above to make his shows diverse. Could Abloh and the casting director for Off-White book a few more Black models?

If Black designers don’t used Black models in their shows, campaigns and lookbooks, who will?

I am sadden by this type of behavior. With that being said, until Abloh‘s shows are more diverse, I will no longer support him or cover his brand.