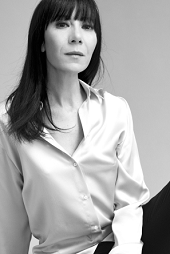 The latest news is that the luxury French house is “zeroing in on a contract with Bouchra Jarrar to become its new women’s designer,” according to WWD via market sources.

The French haute couture fashion designer (Bouchra Jarrar) launched her eponymous house in 2010 and earned the haute couture appellation in 2013. She signed on last month to do a high jewelry collection for Mauboussin, debuting in July.

“The likelihood of a deal with Lanvin could not immediately be learned, but it is understood the house plans to announce its new women’s designer in the coming weeks” says WWD.

The house plans to engage Jarrar for women’s categories only.

Sources said “Lucas Ossendrijver is in contract talks and seeking to secure autonomy for the men’s department, echoing the set-up at Dior and Louis Vuitton, which have long had separate creative chiefs for men’s and women’s.”

“Elbaz tapped Ossendrijver in 2005 from Dior Homme to rejuvenate Lanvin men’s wear, and the Dutchman echoed his use of couture fabrics and designs etched with industrial detailing.”

A spokeswoman for Lanvin said the house doesn’t comment on rumors.