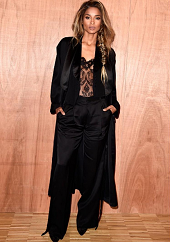 Prior to sitting front row at Le Carreau du Temple for the house’s show, the Atlanta-native spoke to Vogue about being the muse to Givenchy‘s creative director, Riccardo Tisci, now for six years, the outfit Tisci chose for her to wear to his latest show, her first fitting with Tisci, some of her favorite Givenchy archival pieces, and Tisci influencing her style. Below are some excerpts:

On the Givenchy pajama-inspired ensemble she wore to the show:

“It was specifically chosen by Riccardo,” she said to Vogue via email moments before the show. “It was actually my favorite from the Spring 2016 show, but I didn’t tell him that is what I wanted to wear. I like him to be free creatively, and he is an artist as well.”

Do you remember what your first fitting with Riccardo was like?
The first time I met Riccardo was for a show called Oi Fashion Rocks Rio in Brazil. I was the first entertainer he had worked with, and we bonded right away. There was a very special energy in the air.

You were really one of Riccardo’s first muses when he took over as creative director. How has it been to watch his design trajectory at Givenchy over the years?
It has been cool to watch Ricaardo push the envelope and grow.  He is a true visionary and is clear about what he wants to achieve. Watching him do it all from the beginning . . . I feel like proud sister.

I read that you have amassed more than 100 Givenchy archival pieces. Of all the looks you’ve worn of the years, what are some of your favorites?
One of my favorite looks is the T-shirt with the sheer skirt. What I love about it is that it’s the perfect definition of street chic. It’s another style that embraces my tomboy chic vibe. Also the gown I wore to the MTV Video Music Awards in 2013: It was pulled from the Givenchy archives and it took five hands to help [me get into it] because the fabric was so delicate—but it was exciting to wear.

How has Riccardo influenced your approach to fashion and style?
The really great thing about Riccardo is that he embraces my personality and my personal style.