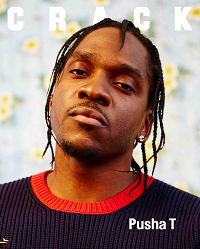 Inside, Pusha talks to writer Jeff Ihaza about his relationship with Kanye West, coke rap, past label drama, his brother leaving the group, the current state of the rap game, his fanbase, last offering, Darkest Before Dawn, upcoming album, King Push which is tentative scheduled to drop this summer and much more.

On his relationship with Kanye West:

On the Clipse’s brand of ebullient raps about the drug trade, dubbed “coke rap”:

“It was more competitive earlier on,” Pusha T remembers as we zip through Chinatown. “The Clipse era was a competitive rap era for me and a competitive production era for The Neptunes.”

On past label drama and his brother leaving the group:

“I think with all of this, label drama, to my brother not being a part of the group, to being a solo artist,” he says, calmly, “it has played out in the best way possible today.”