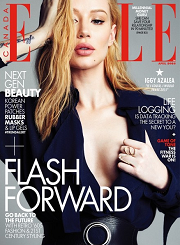 Photographer Max Abadian photographed the Aussie for this issue. She styles in crop tops, bodysuits, and belted coats.

Inside, the 25-year-old Australian talks about her upcoming wedding (she currently engaged to Los Angeles Lakers player Nick Young), upcoming album, Digital Distortion, dealing with online criticism, and much more.

You must be deep into wedding planning. There are so many rumours circulating about what could possibly happen on the big day….
“I know! My mom even asked me if I was having two weddings and lots of horses—I don’t know who wrote that. And to be honest, that sounds like a really trashy wedding that belongs on a reality show. I can tell you right now that my wedding is going to be pretty boring compared to what everyone has been writing about it.”

Tell me about your new album, Digital Distortion.
“I wouldn’t say it’s an angry album. It’s still uptempo and fun, but it’s a little more grown-up and moody. I didn’t want people’s commentary to take me away from the style of music that I make…. There are some ‘Fuck yous’ and ‘Fuck yeahs,’ but I want people to hear it and feel good.”

Does the title reflect some of the “distortions” you experienced that year?
“The album has a bit of an electronic, digital influence, so the name fits sonically. But then, of course, topically, we all know the different things that were said about me in 2015—some of them were fair and some of them, I think, were unfair. I just think it’s interesting that we live in this age of digital distortion where we’re all distorting each other and distorting ourselves and our perception of who we all are, and none of it is really accurate anymore.”

Would you say that your persona of Iggy Azalea is a type of distortion?
“Not at all. It’s not like my alter ego or anything. It’s me. I’m not some quiet person or a complete introvert until I get onstage. Of course there are pieces of me you won’t see, but most of what you see in my music is present in my life. Maybe I am a bit more polite in real life versus online. I definitely don’t say ‘Fuck you’ all the time! It takes a lot to make me pissed off in real life.”