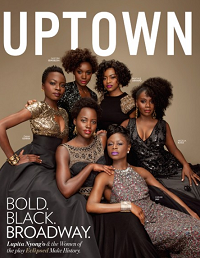 The history making all-black female cast is making their mark on Broadway.  They recently wrapped up their first Broadway preview at the Golden Theatre last night.

Eclipsed is the first play to be written by, directed by, produced by and starring black women. And according to its playwright Danai Gurira, it’s about time.

“That for me is really the most important thing, the exposure of these voices,” she said. “Honestly, the reason why I write what I write is because it’s kind of inexplicable the silence and the lack of representation around these types of women and these stories.”

“That’s kind of the thing that excites me the most is the idea that we’re breaking that type of barrier with these types of women and hearing these particular voices on The Great White Way,” she said. “It’s really time to break through those barriers and show that there isn’t a reason for the lack of representation or the under-representation.”

This issue was lensed by Marc Baptiste and styling was courtesy of Phillip Bloch.