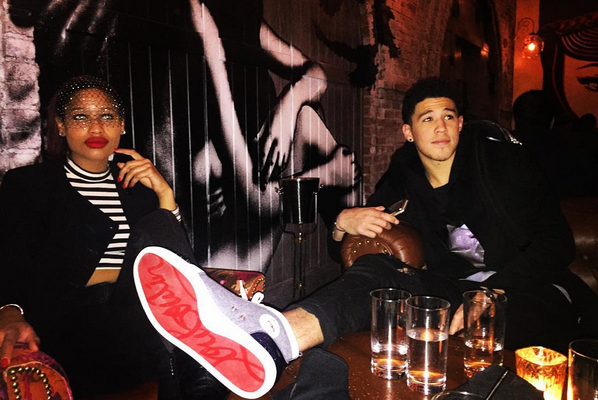 NBA player Devin Booker of the Phoenix Suns dressed in an all-black outfit which was topped off with a pair of Christian Louboutin Louis Strass Men’s Flat sneakers.

The 19 year-old basketball player was born in Grand Rapids, Mich., and attended the University of Kentucky. He was selected by the 13th overall pick by the Phoenix Suns in the 2015 NBA draft.

Last year, the NBA rookie talk about his personal style with WWD.

“I live by the rule, ‘If it ain’t tight, it ain’t right.’ My dad played overseas in Europe for 10 years so I picked up a little fashion style when I visited Milan. My middle name is Armani so I guess I have some designer in me.”

Favorite fashion item:
“I’m big on shoes. When I pick out something, that’s usually the first thing I go for. I’ll build my outfit off of my shoes.” NBA player James Young was outfitted in a Kith sleeveless hoodie which was layered over a Rick Owens tee-shirt, styled with Balmain biker jeans. The Boston Celtics shooting guard/small forward completed his look with a pair of Air Jordan sneakers.