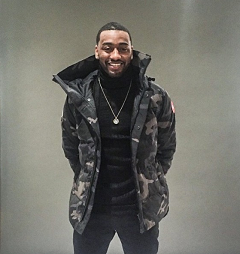 Last weekend, a lot of basketball players flocked to Toronto for the 2016 NBA All-Star Weekend.

“It’s the first year ever that the All-Star Game is outside of the United States. It’s the first time it’s in Toronto. We’re a cold city, we make cold-weather products. I personally love basketball. We were like, ‘Wouldn’t it be great if the best basketball players in the world came to play here and we, on behalf of all Canadians, could keep them warm?'” says Canada Goose CEO Dani Reiss.

The Macmillan parka—new this season—was designed in a Carbon Camo for the Eastern Conference All-Stars and in a Classic Camo for the Western All-Stars. Each jacket featured a special embroidered congratulatory note from Canada Goose on the inside plus the 2016 All-Star patch on the arm. Karl-Anthony Towns of the Minnesota Timberwolves.