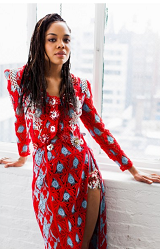 In the spread, the NAACP Theatre Award nominee opts for an upscale look – wearing pieces from Gucci, Marc Jacobs, Michael Kors, and Ralph Lauren. Styling was courtesy of Lindsay Peoples.

Inside, the Creed actress (she stars as Bianca in the Rocky franchise film) speaks on race, Hollywood and more. Below are some excerpts:

Dear White People’s poetic satire about race and identity immediately resonated with audiences and became an instant Sundance success. Throughout the movie, Tessa’s character Sam White struggles with her identity, something Tessa says she never saw portrayed on screen before. “When I read Dear White People it felt like such an indictment of Hollywood. I had been working for about eight years, and there was just a status quo that you begin not to question. You say to yourself: ‘This is how it is’ or ‘Yeah, I just auditioned for the sassy black friend.’ For me it was the first role in a long time where there was a protagonist who was a black woman, specifically a multiracial black woman who wasn’t just the object of a narrative but the subject.”

When Ava DuVernay started casting for her Oscar-nominated film Selma, in which Tessa played civil-rights activist Diane Nash. During the filming, the cast got to sit with civil-rights leaders like John Lewis who led the demonstration we now call Bloody Sunday. “To us [the cast], they were demi-gods — almost a new kind of celebrity. It was incredibly useful to recontextualize the idea of celebrity since we give so much praise and space to celebrities. In some scenes when we were marching it felt like we were superheroes.”