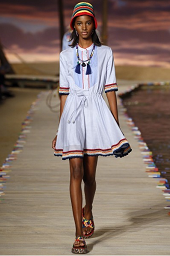 Fashion Is Evolving: Tommy Hilfiger Will Adopt A “Direct-To-Consumer” Model The fashion industry is now adopting a “direct-to-consumer” model.

The PVH Corp-owned brand will start following a “direct-to-consumer” model with its Tommy X Gigi capsule collection, which is slated to hit stores in September 2016. This collection was created in close collaboration with social model Gigi Hadid. Immediately after the show, the collection will be available to buy via Tommy Hilfiger’s own retail stores and e-commerce, as well as its wholesale partners.

According to BoF, “The presentation itself — which the company promises will go beyond a traditional runway show — will air on a “global multi-media broadcast network” and will be targeted at consumers and press. Over the next six months, Hadid will tease the collaboration via her social media channels, offering a sneak peek of the goods.” “It’s like releasing an album,” Hilfiger told BoF, in an exclusive interview, revealing the new strategy. “There are leaks, but the full collection won’t be exposed by any means.”

“For over 15 years we’ve been creating a fusion between entertainment and fashion,” the designer continued. “This gives us the perfect platform to expand upon that. We’ve used the acronym FAME before: Fashion, Art, Music, Entertainment. I think whatever we do from a marketing aspect has to be entertaining and exciting. Content is really key.”

“The September 2016 show will also feature select items from Tommy Hilfiger’s Autumn 2016 collection, which is set to be shown to press, buyers and other industry insiders at 11am on Monday, 15 February, as part of the traditional NYFW calendar. But the move to align runway and retail will take full effect in February 2017, when the brand’s Spring 2017 collection will be revealed and made immediately available to purchase, no small undertaking for a brand with over 20,000 points of sale, more than 1,500 stores and distribution in 115-plus countries.”

“As one of the world’s most recognized American lifestyle brands and most visible shows at NYFW, we have a unique opportunity to take a leadership role in moving the runway closer to the consumer,” said Daniel Grieder, chief executive officer for Tommy Hilfiger in a statement. “In line with our vision to become more consumer centric, it’s important that we channel the incredible visibility and engagement that our shows generate into the moment when the product launches. This is the next step in our journey to shorten the development cycle and balance our approach to meet the diverse needs of consumers, buyers and media. We are committed to working in a new way with our business partners and the industry to achieve this goal.”

Considering the lead times faced by wholesalers and print media outlets, Hilfiger will also show its Spring 2017 collection privately to buyers and editors in September 2016. “As our wholesale partners’ calendars evolve, we will do it together,” said Avery Baker, the company’s chief marketing and brand officer. “We have not asked them to change their buying cycle. We’ve accommodated them. So it’s a win-win. When the collection is on the floor, there is going to be an incredible amount of excitement that normally happens six months earlier.”

The image used in this post is from  Tommy Hilfiger‘s Spring 2016 Ready-to-Wear collection during New York Fashion Week: The Shows.