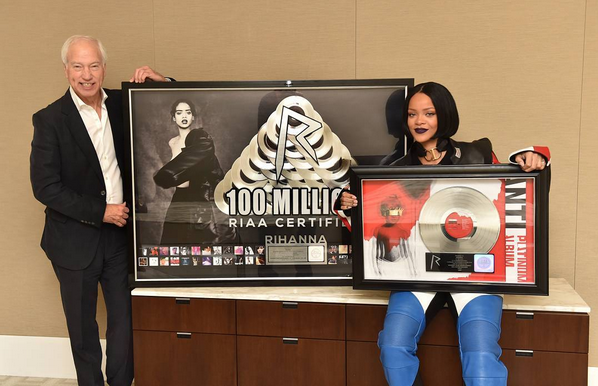 Rihanna is #1 and she has 100 million reasons to celebrate.

This week, her eight studio album, ANTI debuted at the top of the Billboard 200 with 166,000 units sold in its first full week of availability. Last week, the album went platinum (downloading over one million copies) in just 15 hours after it was released via a partnership with Samsung. The tech company purchased one-million copies. Those downloads earned Riri a platinum plaque but they were not counted by Nielsen.

The singer has added some more major accolades to her already illustrious career. The Bajan-beauty becomes the first and only artist in RIAA Gold & Platinum history to be certified with 100 million song awards.

The above image is of Riri seated in front of her plaque and her holding a second plaque for ANTI. Riri‘s Drake-assist single “Work” reached No.7 on the Billboard Hot 100 this week.

Next up, Riri will perform at the Grammy Awards on Feb. 15 before heading to the U.K. for the BRIT Awards on Feb. 24. Two days later, she will embark on her ANTI World Tour.

The 60-date trek, power by Samsung, will kick off its North American leg on February 26 in San Diego and will feature rapper Travi$ Scott. The tour will travel to arenas in major cities including Los Angeles, Las Vegas, Brooklyn, Miami, Philly, Newark, Atlanta and more before wrapping up on May 7th in Oakland.