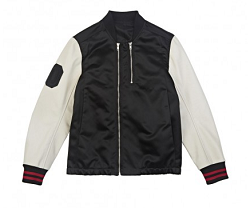 Russell Westbrook Teams With Tim Coppens For A Barneys Collaboration The duo teamed up for a capsule collection of relaxed silhouettes, neutral colors and layered looks that reflect both the designer and the athlete’s style.

According to WWD, “The six-piece collection will hit stores on Monday.”

“The Russell Westbrook XO Barneys New York x Tim Coppens collection will be sold at select Barneys stores and online. Pants will retail for $675, a varsity jacket for $1,650 and a pullover for $595.”

“I’ve enjoyed getting to know Russell over the last few years as he has been such a great supporter of the Tim Coppens brand,” the designer said. “Likewise, Barneys has supported us from the beginning as our first retailer for both the men’s and women’s collection. This collaboration felt natural for us and we are excited about the way the collection has come together.”

Westbrook has a good relationship with Barneys. Last December, he released a men’s jewelry capsule collection, called Barneys XO Exclusively Ours Russell Westbrook x Jennifer Fisher via Barneys, back in September, the NBA player collaborated with the luxury store for a fall 2015/winter 2016 Capsule Collection, called, Westbrook XO Barneys New York (see it here), he launched the Byredo Westbrook Eau De Parfum with Barneys last year, and he also collaborated with the department store on an XO Exclusively Our collection of 16 pieces (hats, shoes, bags and sunglasses in bold patterns, colors and at a high-end price tag) which were all designed by Westbrook himself.