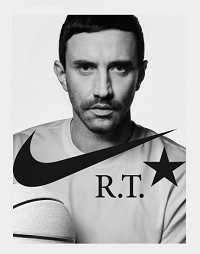 Back in 2014, donbleek.com reported that Givecnhy‘s artistic director Riccardo Tisci and footwear, apparel and sports giant, Nike teamed up for a sneaker collection, called the ‘Nike X Riccardo Tisci-Nike + R.I. Air Force One‘ (see it here). These sneakers were so popular that just about every major celebrity had a pair (see it here).

We’ve got some good news for all of the sneaker heads. Tisci and Nike reunited for another collaboration.

Images of the upcoming Nike x Riccardo Tisci’s Dunk Lux High were just released. This shoe will release exclusively in North America on February 11 for $300 at NikeLab retailers and nike.com/nikelab.

“The Nike Dunk has a fascinating legacy. It has been both mainstream and niche, adopted by communities of varying size and influence. But no matter the model, the Dunk has always had a cultural cachet that, as a designer, I’m quite drawn to.”

For his part, Tisci exaggerated the proportions, by extending the height and enlarging the Swoosh, foxing and eyestay. In addition, the back tab is now upside-down and placed directly above the Riccardo Tisci logo on the heel.