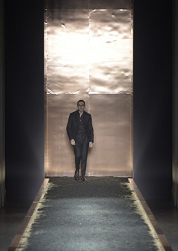 Above Image: Alessandro Sartori taking a bow at his last Berluti show in Paris.

Some more fashion news is shaking up in Paris.

Designer Alessandro Sartori is to exit Berluti after a five-year collaboration for a new opportunity. He partnered with Antoine Arnault (Son of LVMH chairman and chief executive officer Bernard Arnault) to expand elite cobbler Berluti into a lifestyle label for men. The Paris-based firm is controlled by luxury giant LVMH Moët Hennessy Louis Vuitton.

Sarotri‘s last show for the brand was his fall 2016 collection, presented on Jan. 22 at Les Arts Decoratifs during Paris Fashion Week.

“I’m very proud to have had the opportunity to develop this extraordinary company and to have created a silhouette for the Berluti man. I want to thank Antoine Arnault and Berluti for the trust they have put in me,” says Sartori.

“He is moving on. We decided this together,” Arnault told WWD, characterizing the parting as amicable. “We are remaining very good friends. Clearly, it’s the end of a chapter for us, and it was a beautiful one.”

Arnault said he would appoint a new artistic director in due course and wished Sartori “all the best. I know he’s going to be very successful in his future endeavors.”

The executive noted that Berluti “remains a shoe brand and shoes remain the biggest category for us, complemented by leather goods, accessories and ready-to-wear.”

Speaking of Ermenegildo Zegna, we just mentioned in the previous post that Stefano Pilati is said to be leaving Ermenegeilo Zegna Group.

Could Satori be going back to Ermenegildo Zegna?