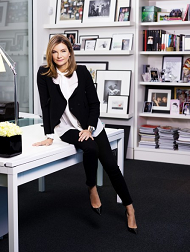 Back in November, we reported that Massenet has registered a new company called Imaginary Ventures Ltd. The company has been registered in the U.K. Paperwork was filed at Companies House, the official registry of all U.K. businesses (see it here). She’s also served as chairman of the British Fashion Council since early September.

In the midst of all of Massenet‘s moves, we also reported that the American born could relocate back to the U.S. from London, and end up on Condé Nast short list of candidates to one day become Anna Wintour‘s successors at American Vogue (see it here).

The Vogue rumors are back, but she won’t be replacing Wintour (anytime soon)! Massenet is rumored to join American Vogue in some capacity, the New York Post reports.

According to the NYP, “renewed buzz that she is headed to Vogue in some capacity is being spurred by two events: 1) Grace Coddington stepping down, the longtime creative director of Vogue and 2) a rather interesting political fundraiser being hosted by Massenet in London for Hillary Clinton.”

“Former first daughter Chelsea Clinton plans to be there along with Wintour, who also has a broader role as Condé Nast’s artistic director.”

“They are very good friends,” one insider said to NYP of the Wintour Massenet connection.

“The conversation is happening,” another source said to the NYP, adding that the scuttlebutt is coming from a well-placed Condé insider.

Nothing has been settled. But if the talks come to fruition, the source said, “she’d work alongside Anna.”

Massenet began her career at Women’s Wear Daily and worked as Isabella Blow’s assistant at Tatler. She founded Net-A-Porter in 2000 in London, and launched the site in her Chelsea home. She leaves with more than 100 million pounds ($153 million) after selling shares in Net-A-Porter, according to their source.