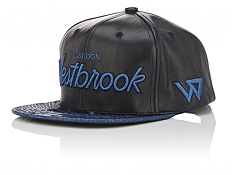 Made with Just Don’s signature combination of python and leather, the hats in this collection feature pop-color accents and Westbrook’s signature embroideries. Russell Westbrook says “I have always liked Just Don‘s hats and was really excited to work with him on this collection for Barneys New York.  I think the hats show both of our styles and are the perfect touch to complete a look.”

Westbrook has a good relationship with Barneys. Last December, he released a men’s jewelry capsule collection, called Barneys XO Exclusively Ours Russell Westbrook x Jennifer Fisher via Barneys, back in September, the NBA player collaborated with the luxury store for a fall 2015/winter 2016 Capsule Collection, called, Westbrook XO Barneys New York (see it here), he launched the Byredo Westbrook Eau De Parfum with Barneys last year, and he also collaborated with the department store on an XO Exclusively Our collection of 16 pieces (hats, shoes, bags and sunglasses in bold patterns, colors and at a high-end price tag) which were all designed by Westbrook himself.