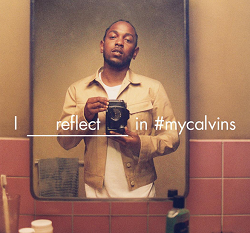 Earlier this morning, we announced that mega popstar Justin Bieber is the face of Calvin Klein‘s Spring 2016 Global Advertising Campaign (see it here) as well as Brooklyn‘s rapper Joey Bada$$ (see it here).

The iconic brand tapped big-name celebs and lesser known singers, models, rappers and influencers to star in their campaign.

Championing its hashtag #mycalvins, the campaign made its debut via the stars’ social media accounts. Tyrone Lebon shot the campaign.

Discussing the campaign this season, Calvin Klein, Inc. CMO Melisa Goldie says, “This campaign is representative of how culture is evolving as we speak. We’re bringing together a diverse mix of provocateurs with a unique collective of visual artists to create content that sparks and drives cultural conversation.”

Goldie adds, “Millennials reject labels when it comes to their own identities, and they want products that are personalized and individual, which we’re achieving as Calvin Klein moves toward further establishing itself as a lifestyle-centric global brand. To do that, we have to recognize that people don’t want traditional one-sided advertising anymore. Instead, they want to participate in campaigns that capture their imagination. With this campaign, we feel we have created something that truly illustrates the future of the brand, and captures the current youth culture zeitgeist.”