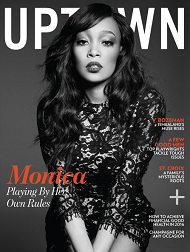 Monica Brown For UPTOWN Magazine: Styles In Stella McCartney & Donna Karen; Plus She Talks About Being Karl Lagerfeld’s Muse This issue was lensed by photographer Drexina Nelson, with styling courtesy of Shun Melson.

Inside, the “Just Write For me” singer talks about being guarded, how she wanted to be recognized and calling shots with Dallas Austin, touching countless women, and some young men with her music and message, being a muse of Chanel‘s Karl Lagerfeld, being called an “underdog” and much more. Below and on the next page are some excerpts:

“People wouldn’t really be able to imagine the things I’ve seen and been through,” says Monica Brown, in response to the suggestion that she’s guarded. “My talent has always been there, along with the spiritual foundation my mother laid, but there was always another side, a side that belonged to the streets. When my parents divorced, I became two different people.”

On how she wanted to be recognized and calling shots with producer Dallas Austin:

“Dallas would bring producers in the studio to play records for me and I’d be quick to say ‘No’ if I didn’t feel it. I knew who I was and what I wanted to say.” “That’s where ‘Miss Thang’ came from. He’d say, ‘Miss Thang don’t like it!’”