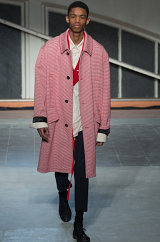 All eyes were on Raf Simons in Paris. Why? Because what he has been doing with his shows for the last few seasons is exciting. He has taken the runways by storm. People also wanted to see his first post Dior show. Last fall, Raf Simons departed from Dior. But before being artistic director of Christian Dior for 3 1/2 years, Simons was already a household name.

He launched his eponymous label in 1995 in his hometown of Antwerp, Belgium.

His Fall/Winter 2016 outing, entitled, ‘Nightmares and Dreams,’ certainly proved that he’s here for the long-run. Simons also looked to his Fall/Winter 2012 collection, entitled Virginia Creeper, as well as some of his other previous outings, for his menswear collection this season, shown in Paris.

The Belgian fashion designer “constructed a complex labyrinth of wood, like a series of twisting alleys culled from a horror film, around which his audience loitered, waiting for the models to appear,” says Vogue.

When they did appear, the model rushed through the crowds in oversize coats, and down jackets, in latter. Simons said the latter was coincidence.

Simons issued guests with pamphlets. Key words and phrases including Angelo Badalamenti, Elm Street, Horrors, Scream, American Youth, Belgian Youth, The Sports Bar, The Black Lodge, and more were printed in black on the white pamphlet. He also listed four collections on the bottom of the pamphlet: “Riot, Riot, Riot,” “Woe Onto Those Who Spit On The Fear Generation,” “Virginia Creeper” and “Waves“.

“All the things on this list were what was on my mind,” Simons said. “Not trying to think about the stories I could make. Very fragmented.”

Simon‘s concept this season was turning back the hands of time – back through 20 years of his own archive. The clothes shown during the presentation were ripped, sloppy, torn and patched together. There were high school sweaters, college-inspired sweatshirts, button-ups, skinny trousers, trench-style coats, oversized puffer coats, peacoats, large houndstooth jacket, and more.

See images from the presentation on the next few pages.