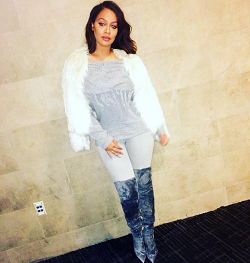 The Brooklyn-native has joined the producing team of Eclipsed, the drama that will mark Oscar winner Lupita Nyong’o debut.

The cast includes Pascale Armand, Akosua Busia, Zainab Jah and Saycon Sengbloh for the story of a group of five women who begin the play at the mercy of a brutal local warlord and form a compelling tight-knit group.

Eclipsed, by playwright-actress Danai Gurira was presented earlier this season at the Public Theater, where critical acclaim and sold-out houses led to the Broadway move.

According to Deadline, “The play, set in the violent chaos of the Liberian civil war, is staged on Broadway, as it was at the Public, by Liesl Tommy.”

The drama is slated to begin previews February 23 at the Shubert Organization’s John Golden Theatre and open on March 6, with a limited run through June 19.

“I am so thrilled to be joining a production filled with such powerful, talented women,” Anthony told Deadline. “Eclipsed is a stunning new play that demands to be seen, and to make my Broadway debut as a producer with it is an honor. I’m especially excited to join the production’s efforts to bring thousands of young women to see the show through its 10,000 Girls campaign. What an extraordinary opportunity to pave the way for the next generation of commanding young women.”

The initiative aims to bring 10,000 girls from the Tri-State area ages 16-24, who likely would never have the opportunity to attend a Broadway show. Details: www.tenthousandgirls.com.