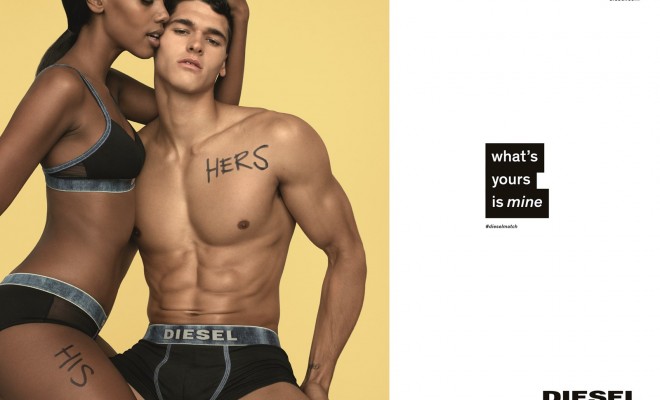 For the brand’s Spring 2016 ads, Diesel was highly influenced by social media and the internet – creating custom emojis and videos that reference online dating, Snapchat, selfies and more.

The ads will run on dating and sex sites including Phub/YouP*rn, Grindr, and Tinder.

Formichetti told Dazed magazine, “I wanted to decode the idea of digital culture – the way we connect,” Formichetti said. “Emojis are our new language, this is how we communicate now.”

“We still advertise on billboards and magazines they’re important, but more and more we need to start advertising where people go,” Formichetti said. “Which is phones, iPads and digital screens, websites.” “For Tinder, we got one of our models to pretend to be a user, so you’re swiping and then Sam comes up like ‘hello!’ It’s clear that it’s an ad, but we’re engaging with where we are, and that’s about this transparency.”

“To launch our new underwear on Phub is like… hello!” said Formichetti. “They were so collaborative, I think we’re the first brand to go on Phub. At Diesel, we want to talk about things that not everyone else is talking about – I like that we get to do that. Sexuality is still a taboo in today’s world.”

Expect the ads to break soon!

Signorino is represented by Re:Quest Models in New York, while Woo Kim is with Select Model Management in London.