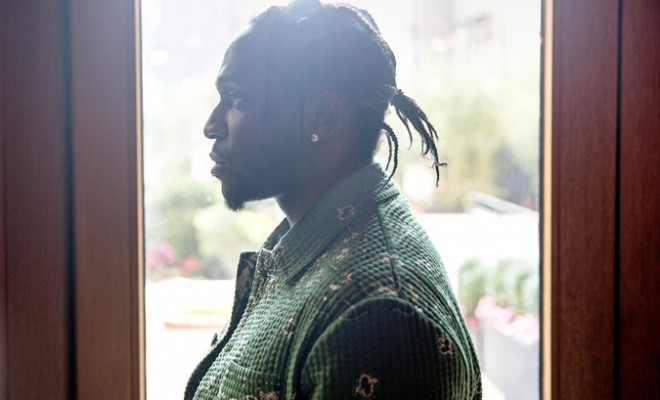 Inside Of His Closet: Pusha T’s Reveals His Five Favorite Fashion Items There’s no denying that Pusha T is setting fashion trends. When he’s on stage performing or releasing videos, people are tuned in for the music and his street lyrics of course, but they’re also hyped to see what he’s wearing.

In the inner cities, when it comes to fashion, Pusha T is the heart of the streets. BAPE, Pyrex, Fear of Good, extended tee-shirts, numbers on the back of tee-shirts, and distressed denim jeans, that’s Pusha T. He started those trends!

In a recent interview with New York Times, the new President of G.O.O.D. Music talked to the publication about fashion. He also enlisted his five favorite items from his personal closet in the interview.

Jacket: I love the pieces from By Walid. It’s this London brand my stylist Marcus put me on to some time ago. This piece is silk with 18th-century embroidery. Every jacket is a one-off. I actually went to the designer’s studio last week in London and got to meet him. It was pretty fresh. He’s extremely artsy and a really cool guy. He had some newer patterns and jackets to choose from. For me, the details matter: Fashion and hip-hop are always about being first and being different and being able to set yourself apart from the bunch.

T-Shirt: Right now I’m really into John Elliott. He’s an American designer. He has a pretty comfortable sportswear brand. His T-shirts, I probably have one of every color. I first met him at the first season of Kanye’s fashion show. He sort of let me know what he had going on, and when his newest collection dropped, I got a couple pieces.

Jeans: As far as jeans go, it’s going to be Saint Laurent. Some say it’s slim, but slim is in. I have them all: black, blue, gray, whatever is fitting.

Sneakers: Right now, I’d have to say my own, which are the Adidas EQT Black Market edition. It comes with “King” and “Push” on the laces in the front. It’s black with 3M detailing — it’s reflective. I also did this fish-scale detailing in the black, and there’s Italian cracked leather. It’s all black, because that’s what I want to wear. As for why it’s “Black Market,” I wanted to represent the hustling aesthetic where I’m coming from, so I actually packaged these in a plastic bag and first released them in Chinatown.

Watch: I have about 13 Rolexes. But my favorite one is a platinum Day-Date II President. It’s really understated. There are only diamonds on the dial in the inside. But people who know, really know. Rolex has always been such a staple hip-hop watch. To me, it just speaks of class.