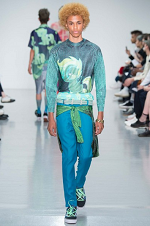 Congrats are in order!

The curly blonde hair model has taken 2015 by storm. From advertisements to editorials and runways in New York, Milan and London, we couldn’t resist from seeing Lockley‘s golden face.

I’m so glad that a model of color has had an amazing year and accomplished as much as his White counterparts.

We’ve come a long way, but still have a long way to go. Let’s keep fighting for diversity in the fashion industry.