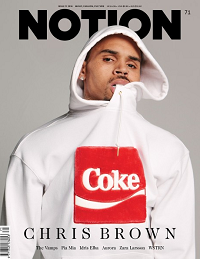 As 2015 comes to an end, Chris Brown covers Issue 71 of Notion magazine.

According to the UK-based publication, “In his most honest interview to date, we get to know the man behind all the headlines and discover his true feelings. Chris talks about his humble upbringing and his rags to riches fame, as well as the joys and difficulties in becoming a father, reflecting on his past and determined to change his future. The singer, actor and dancer also explains the meaning behind his new album, named after his one and a half-year old daughter, ‘Royalty’.”

“I love being a father, you know, and at the same time, there were certain wrongs and certain rights that I did do. I might’ve hurt some people along the way.” – Chris Brown