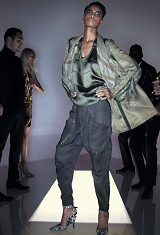 This is the designer’s first time presenting women’s and men’s collections together in New York in this format. Last February, he presented his show in Los Angeles during Oscars season and he showed his last collection via a music video, starring Lady Gaga, in October.

In a statement, Ford explained why he has been experimenting with different show formats:

“When I began my own company I wanted to create clothes with the highest level of workmanship and attention to detail,” said Ford. “Pieces that a customer would keep for life. This is one of the reasons that I launched my women’s collection in a small presentation in New York, where the audience could experience the clothes up close.

“In previous seasons, I have presented the collections in my London showroom to the press in an informal format that allows me to speak with journalists while they view and touch the clothes,” he continued. “As we all know, the way in which we show clothes, not only to the press, but also to the consumer, is changing.”

“Right now, I think that a certain fluidity is necessary in regards to how we communicate with the consumer, and I have experimented with different formats recently,” said Ford. “The most important thing to me with a presentation is that it communicates the message of the season and the point of view of the collection.”

“Next season, it feels right to return to a format that is intimate and shows the detail of the clothes. The intimacy of small presentations affords that. We launched our first women’s collection in New York in 2010 and opened our first store there in 2007. I am very excited to present both collections in New York,” he added.

Ford also mentioned that the American market has become “increasingly important,” for the house with retail flagships opening this year in Houston and Miami, and one in Atlanta slated for Feb. 2016. They will join Ford‘s existing flagships in New York, Las Vegas, Beverly Hills, Dallas and Chicago. The images in this post are from Tom Ford’s Spring 2016 Ready-To-Wear.