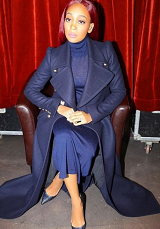 R&B superstar Monica Brown wrapped up her ‘The Code Red Experience‘ tour last weekend. Now the Grammy Award winning singer is in New York doing a lot of press for her forthcoming LP, Code Red, due this Friday (December 18).

The Atlanta songstress dressed in a $4,372 Chloé Long-Length Double-Breasted Coat, layered over a Tomas Maier dress accessorized with python pumps.

The navy ankle-skimming length heavyweight wool coat is tailored with a wide collar and crest-engraved buttons, and is finished with a centre-back pleat for added volume around the legs.

The coat is available at Matches Fashion and Far Fetch.