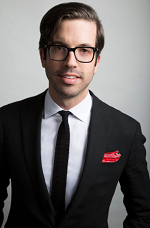 Will Welch has been named editor-in-chief of GQ Style, the spin-off of magazine GQ.

Welch is the current style editor at GQ. He assumes the new role at GQ Style after Condé Nast revealed plans for the glossy up its frequency from biannual to quarterly last month.

According to WWD, “The renaissance of GQ Style, which already exists under Condé Nast International in the U.K., where it is said to thrive, will likely plug the hole left open by Details’ demise in the U.S.“

“Welch told WWD that he’s hoping to expand on GQ Style’s fashion coverage, highlighting the designers who head up some of the most prestigious houses.” He said, “High fashion is the perfect crossroads of art and commerce.” “There’s a real opportunity to capture that.”

Welch is also hoping to shed light on his generation’s lifestyle: “What we’re really trying to capture is this very modern idea of the good life,” said the 34-year-old editor. “We’re looking at lifestyle in general through the prism of fashion.”

“I unequivocally think that the market is underserved. There’s a lot of great stuff out there, but I’m part of a new generation that doesn’t quite have our niche…completely captured in magazine form,” the editor said. “I think there’s a hunger for that, for it to be laid out there in an aspirational way.”

Each issue will feature about 200 pages, will cost $14.99 and feature high paper stock and macrophotography of products with a high-end aesthetic. The next issue of GQ Style will be out on March 1, but Welch’s first issue will debut on May 15.