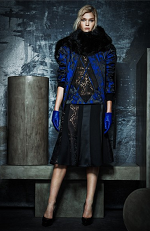 Last April, fashion designer Rachel Roy opened a new office and showroom at 58 West 40th Street. This past August, after seven years of exclusively with Macy’s, her contemporary line Rachel Rachel Roy expanded to include dresses, which opened up wholesale distribution to Von Maur and Lord & Taylor.

Roy spent most of this year regrouping after an uproarious 2014, during which the then-10-year-old designer collection shuttered, and her partnership with Jones Apparel Group dissolved along with the company, resulting in a lawsuit.

According to WWD, “Roy filed suit against Jones in April 2014 in an effort to stop the company from selling her business to Bluestar Alliance, which she alleged in court documents was done without her consent. She won the first round in May 2014 after a New York State Supreme Court justice granted her a preliminary injunction barring the sale. The case was later settled out of court.”

Roy also relocated to Los Angles full time after being in New York for 20 years. Her move actually resulted in a good business partnership. “I met my partners in California and I don’t know if I would’ve met them had I not moved.”