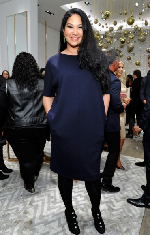 Last Thursday (December 10), former model turned fashion mogul Kimora Lee Simmons celebrated her KLS boutique in Beverly Hills which was put on by W magazine to celebrate the line’s first retail outpust. The cocktail party was wall-to-wall packed, it was standing-room only.

The store had opened back in the summer, but Simmons considered it the door’s official grand opening and traffic has so far been steady.

“I think being that we’re in Beverly Hills and being on Beverly Drive you’ve got the luxury traffic, holiday traffic, tourists. It’s been great,” Simmons said. “We’ve gotten a great response.”

Even though the store is in Beverly Hills, the company’s headquarters is in New York‘s Flatiron District. Simmons is bicoastal, traveling back and forth between the two coasts every other week. The entire line is manufactured in New York.

“I wanted something intimate and chic so I thought I’d start in Beverly Hills because it’s all about the new things for me,” she said.

Simmons said she’s been hunting for space for a second store in Southeast Asia, where she has fans of the brand, but it’s been challenging.

“It’s been tough. It’s really small real estate and really long lead times,” she said. “I was looking at Singapore and Malaysia so I would like to do that, but I think little by little. Right now I’m really happy with where I’m at and the pace and the size. It’s easy for me to manage.”

The collection is also available at select doors of Bloomingdale’s and Saks Fifth Avenue.

Managing the business and not scaling too quickly are key.

“I started this myself,” she said. “It’s small and intimate and it’s important for people to know in terms of design, manufacturing, the ads — everything that you do — you’re invested in yourself and I think that says a lot for your product. It says you’re not going anywhere.”