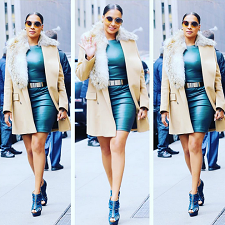 She Made It Look Good Too: Lala Anthony Styled In The Same Outfit She Wore Back In 2013 Lala Anthony was recently on a press run, promoting Unforgettable. She stopped by Aol‘s BUILD for a conversation.

During the conversation, Lala talked about her role on the show, “I don’t love seeing dead people but it doesn’t bother me! It was great to learn.” She also talked about her family and announced that she has partnered up with Queen Latifah to turn her The Power Playbook into a film.

“I partnered up with Queen Latifah to turn the book into a feature film,” announced Lala.

For the appearance, the fashionista styled in an outfit that she wore in 2013 at the Toronto International Film Festival (TIFF) for the 12 Years A Slave premiere. In 2013, Lala wore this sold out $859 The Row ‘Quarny’ Green Leather Dress and sold out $1,295 Christian Louboutin ‘Katrina’ Blue Watersnake 150mm Sandals (see it here).

Back then, Anthony accessorized her outfit with a $720 Stella McCartney Metal-Trimmed Faux Leather Waist Belt. This go ’round, she accessorized her look with a chic coat, sunglasses and black belt. Lala in 2013 wearing the same outfit she wore the other day.