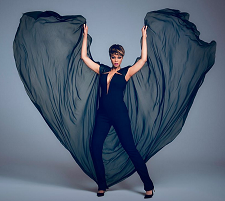 How ANTM has changed high fashion

Everyone is pushing fashion to the limit now. “We were doing themed fashion shows on Top Model, and people were thinking I was crazy,” Banks says. “Like, I’m going to have rain all over the runway, or I want girls walking in water that’s ankle-deep. And now that’s normal. Every season Chanel is in a strange location doing something that’s a theme, whether it’s a protest or in an airport.”

“Season 2 we rigged (the models). We were in an old coffee factory that was five or six stories high, and back in the day there was this big open hole through the middle of the factory that somehow sent big mounds of coffee through, and we hung our models through that, dangled them and shot them. The pictures (stunk). Looking back, I didn’t like them. But that was crazy.”

Not paying attention to numbers. “I didn’t follow metrics as much as I should have. We didn’t look at ratings and go, ‘Oh, that episode rated (highly) so next year let’s do that again with a twist.’ …We just went off our gut and what we thought would be good.”

The reality show has spawned more than 20 international spinoffs, from Top Model China to Top Model Holland, the latter which just crowned a transgender winner. Banks says the U.S. version was ahead of the curve, too, with trans contestant Isis Kingcompeting in its 11th and 17th cycles. “Isis was a trailblazer,” she says. “We (also) had the first gay kiss on competition reality television.”

Banks says she walked away from her new talk show, co-hosted with Chrissy Teigen and fashion editor Joe Zee, to focus on her cosmetics company, which she developed while studying at Harvard. “I realized that if I stepped away (from show business) for five years to start this business, I need to focus on this and not run my company in emails and in quick meetings between shows of FABLIfe. And I made that decision.”

Can the fashion industry make it?

Banks says reality stars such as Kendall Jenner of Keeping Up With the Kardashiansfame and Gigi Hadid, who was introduced on the Real Housewives of Beverly Hills, aren’t hurting modeling, they’re saving it. “A year ago, if you were to have asked me about the state of the modeling industry I’d say it’s in flux, it’s dying, it’s not super relevant. But I really feel social media has saved it. Cara Delevingne and Karlie (Kloss) and Gigi (Hadid) and that group of girls have saved it. (Social media) gave them a voice for people to care about them. People did not care about models.”

Read the interview in its entirety here.