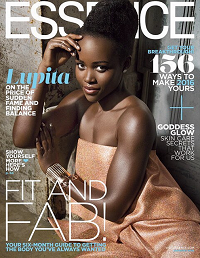 Another day, another cover featuring Lupita Nyong’o. Yesterday, we posted her covering the December 2015 issue of Rhapsody magazine.

Today, the Kenyan actress graces the cover of the January 2016 issue of ESSENCE magazine.

Nyong’o has become a household name in Hollywood since wearing an Oscar for 12 Years A Slave. She will star in Star Wars: The Force Awakens (which premieres this month).

Nyong’o is a busy woman these days. She’s performing in Eclipsed, currently off-Broadway and heading to the Great White Way in February. The play is set during the Liberian civil war and looks at how the lives of five women are severely impacted by the ordeal. Nyong’o‘s role as one of the captives subjected to regular trauma is “physically and emotionally exhausting,” but it was one she felt she had to inhabit.

Inside, she talks about Eclipsed, fame and more.

“I didn’t grow up seeing African women onstage very often, much less Africanwomen in African stories. I was in love with the world Danai [Gurira] created,” she says.

“After 12 Years a Slave and the quote-unquote meteoric rise, I felt like there was a moment where I was suffering from whiplash. I had talked so much about who I was that I’d forgotten who I was,” she says.