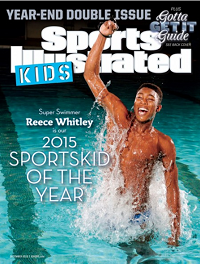 donbleek.com is all about inspiring, motivating, encouraging and supporting the youth. The kids today are the future!

15-year-old Philly-native Reece Whitley is Sports Illustrated‘s “2015 SPORTSKID OF THE YEAR“. Below are some highlights:

When Whiteley was a kid, his his parents agreed to put up a basketball hoop in their front driveway just outside Philadelphia. “We thought he wasn’t going to let the cement dry around the base of it,” recalls his mom, Kim.

Reece had begun playing competitive basketball when he was seven — around the same time he began T-ball and swimming — and he was, of course, a post player. A self-described “solid mid-range shooter,” Reece could dunk on a hoop by the time he was 13, though he never dunked in a game.

While he still loves basketball, Reece, now 15 and 6’ 8″, is no longer on a team. But the sophomore at William Penn Charter School has won a junior national championship and holds five individual national age-group records in the pool, where he has become one of the top young swimmers in the country. His times in the 100- and 200-meter breaststroke last year qualified him to compete at the 2016 U.S. Olympic Trials this June in Omaha, Nebraska. He’s also become a role model for young swimmers in his community and wherever he travels. “I’ve had so much fun watching him grow, continue to love the sport, and advocate for the sport,” says Crystal Keelan, the head coach at Penn Charter Aquatic Club (PCAC). “As he’s maturing, he’s wanting to spread the word about swimming and making connections with people of all ages.”

You could read the entire story here.